This is a story about UFOs, a creature that stood about 8 feet tall out in the woods, a fireball that came so close to my brother, father and I that we all ducked and jumped out of its way, two red eyes that peered into my little brothers bedroom on the second floor of our house, jets that swooped down so close that it blew our pine trees half way over and other strange things...

It is a story that I have a need to share, partly because I'm wondering if anyone else close to where I lived at the time had experienced anything similar and also simply because I think it is good to share our stories with each other about this type of phenomena.

For me, these are good memories of our house and land where my mother, father and myself and 3 brothers lived for about 8 years.  We move into the house around 1960 and it was an old house which was an addition to what was an old log cabin.  We had 5 acres of land, part woods and part orchard near the house.  Beyond our small piece of property behind us was nothing but acres and acres of woods with tall trees, so big and wide that my father got lost squirrel hunting once.

The property was in Westerville, Ohio on Sunbury Road about a quarter mile south of the entrance to Hoover Reservoir and a stone's throw from Central College where I went to elementary school.  I'm hoping that someone who had lived near us and who had similar experiences might come across this information and contact me.

The things that I saw while living there were very strange but all the time up until I started going to the Roundtown UFO Society meetings I didn't think a whole lot about it except we had no explanations.  It was the unexplained that enticed me to contact Pete Hartinger by phone and ask him if I could make up a website for the group.  I've found that it helps me more easily learn about a subject if I put the effort to create a website about it.

It was only after going to the Roundtown UFO Society (RUFOS) meetings for a while did a puzzle I didn't even realize existed could be put together.  It was the interesting discussions we had at the meetings about the different phenomena and how they were sometimes found to have relationships with each other that caused my light to finally pop on.

Accompanying the following sketches I've drawn up will be explanations as to what happened that particular day or night back in the 60's.  Discussions about the relationships of the phenomena with UFOs will be included. 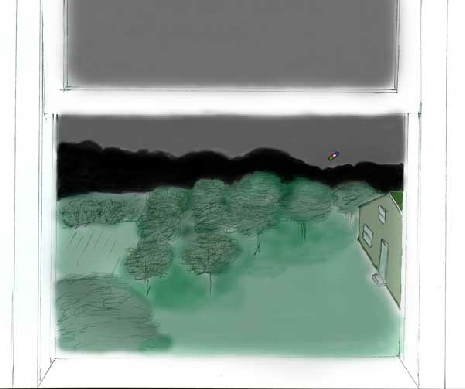 This night I was upstairs in my bedroom just after dusk looking in a westerly direction out the window when a light caught my eye.

At first I thought it was an airplane but after staring at it for a bit I noticed it was multicolored and that it wasn't moving like an airplane would normally move.  It wasn't going in a straight line, it was hovering.  What now makes me think it was a UFO was while it hovered it would tilt one way and then the other slowly. It was too far away to see any type of shape and I can't remember the exact colors but it stayed in my mind because of its strange movement.  The area it appeared to be in would turn out to be near where my brother and I saw a large creature at a later date.  It was in those woods.  I wish I could tell you more but that is it. 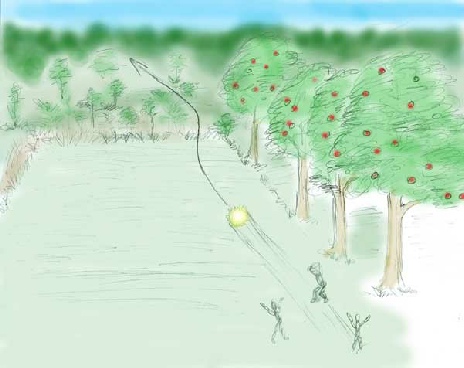 This happened in the middle of the day when my father, brother and I were out near the orchard.  Out of nowhere the fireball came blazing by all of us, nearly hitting my father. I remember him saying he felt the heat from it.
The directional arrow indicates the path of it and, if you'll notice, the fireball flew past us head and shoulder level toward the back of the property where there were trees.  I remember now thinking the ball had to have moved in an upward direction to clear the trees and then continue on into the deeper woods farther west.  I ran out into the woods quite a distance thinking I would find a fire where it came down but couldn't find anything.  The strangest thing that stands out in my mind now is that it had to move in an upward direction to clear the trees. This illustration, as I think about, it is a bit of an exaggeration, but I want to get the idea through that it was down about our head level and then had to rise to clear the trees. 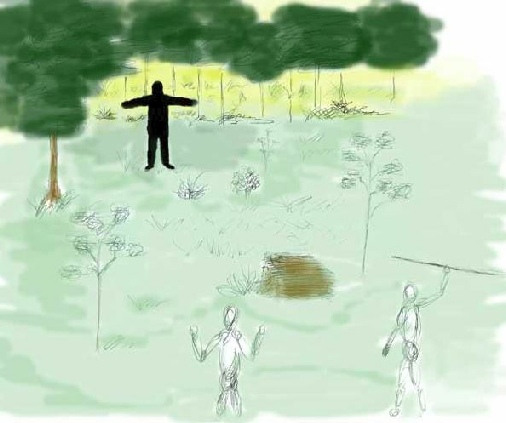 One day, I think it was in the afternoon, my older brother and I had gone out into the woods behind our house playing around.  We had gone beyond our five acres and were in the "deeper" woods.  We found an old decaying bale of hay and had cut down a maple sapling, sharpened one end as a spear, and were throwing it at the bale of hay.  We did this for just a short while when all of a sudden we heard this extremely loud roar (for lack of a better word to describe it).  When I looked to see what it was I saw a silhouette of a tall creature with it's arms spread out.  I believe it was about 8 feet tall.  I still rationalize that maybe it just looked that tall because of how frightened I was but I don't think so.  It wasn't shaped like a bear because it had longer arms.  Because of where the creature was with trees and an open field behind them, the sunlight from beyond the trees and behind the creature caused it to be darkened as in a silhouette.  I didn't see distinct features because of this.  As I think back I believe it was intentionally trying to scare us away because of the posture it took as it roared.

We just dropped the spear and tore off back to the house as fast as we could run.  The was the first time I could almost keep up with my big brother.  I'm sad to say that my only other witness (my older brother Lance) has since passed on so I'm on my own on this one.

I can't remember how my mother and father reacted or if they reacted at all.  I don't remember them making a big fuss about it.  I wonder if they just thought we were making something big out of little or nothing.  Both of them have passed on as well.

Some time later a chicken hutch about a mile or so south of our house (part of the home for the aged and deaf) was torn into, chickens slaughtered and word was there were tracks leading back into the woods.  These woods were still part of or connected to the large area of woodland that stretched north, south along with and west of Sunbury Road.  Back then there wasn't really any new housing or construction as is today so there was ample woodland that wasn't disturbed and all of Hoover Dam was surrounded by woodland as well.

Another thing, years later, (mid-70's) that kept my curiosity up was when I was at Columbus Technical Institute I happened to hear a girl speak of a cow being found mutilated on a property near us that had the tell-tale strong smell that sometimes accompanies these types of finds.

I know this has to seem far-fetched but I am not making this up.  This all really happened.  There is no way I can prove any of this but it would really make my day if, by chance, someone who lived near Hoover Dam would read this who experienced similar things would contact me with their story.
Our property had an orchard of apple trees, a pear tree and some cherry trees which, when hearing other folks’ stories, is an attraction for these creatures.

I dearly loved that old house and land and Hoover Dam and the good times we had there and have good memories that I'll cherish for a life-time.

I believe what my brother and I saw was probably a Big Foot or Sasquatch.

Now that my fiance and I are living in West “By God” Virginia, we are seeing possible evidence of our furry neighbors again.
We hope to see them again.  That story can be found here:  https://www.bigfootin.com/our-ongoing-investigation-at-home 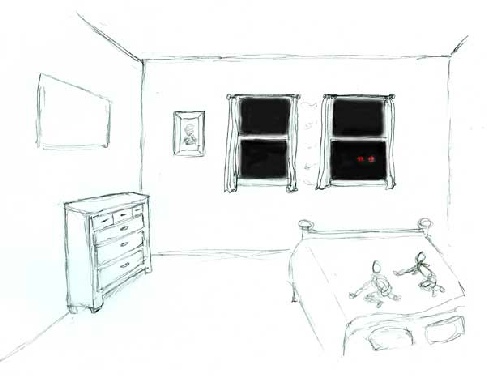 I will always remember the chills that went down my back when I heard the screams of my two younger brothers when they saw two red eyes peering into the second story window of their bedroom. My younger brother said that he also saw a shadowy figure (that had to be standing on the front sunroom roof) and that our father spoke about some of the shingles being a little torn up on the roof.

In many of the Bigfoot stories that we hear, people speak of seeing the eyes and/or face of the infamous creature looking in at them.

When I put this along with the story written above of the creature that scared my older brother and I out in the woods, it leads me to believe we were experiencing the visitations of the creatures.  They hold my interest due to this.