What we mean by “local sightings”

RUFOS is very interested when people see strange, hard-to-explain anomalies and we are especially interested in the local sightings here in the Pickaway County and surrounding counties where we are based out of (Circleville, Ohio).

Below is a general map of the area RUFOS
has been investigating: 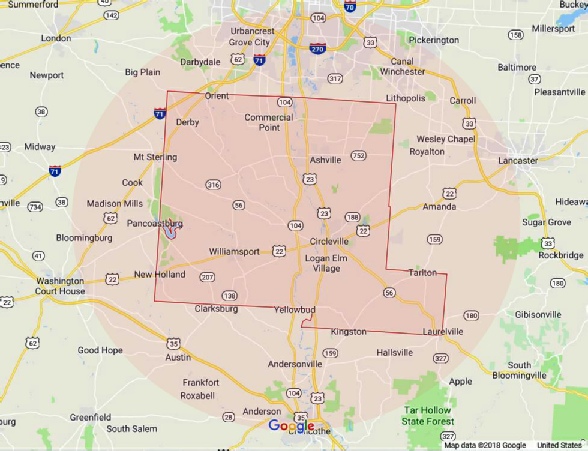 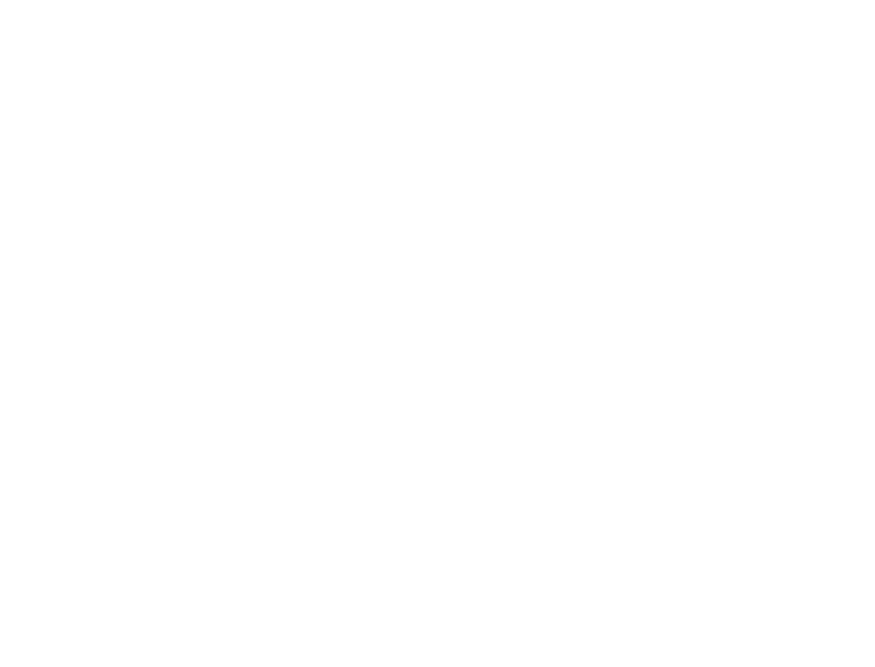 This page will be dedicated largely to local sightings that we’ve been made aware of in the general area of the circle on the map above, but will involve some outside of those parameters.  There are so many sightings that happen all around the United States and the world and to try to encompass those is not the goal of this website and this page.  There is something to be said about a “local flair’ (not flare) that will intrigue those who live close by and we hope to contact and communicate with those people if possible.
It’s one thing to investigate a sighting, but it’s another to share what is seen and found to establish an awareness of what is happening around us and, in essence, around the globe.
There is an awareness now among those who have been involved in ufological research for any amount of time of the tendency of “the powers that be” to subdue the information provided by the many witnesses and especially the larger, more significant anomalous sightings, with many believing it had started back in the 1940s with incidents being covered up for “national security” reasons.
Our director Robert (Pete) Hartinger feels our information can be a conditioning for the public to eventually be able to more easily accept the inevitable… the reality that we are and have been being visited by extraterrestrials and interacting in some form or fashion with them.

The format of our information will be ordered chronologically with the latest at the top of the list to the oldest presented below it.

Bear with us as we try to gather the information we have accumulated, assimilate it and begin to provide it in a presentable manner.  We will be using Adobe PDF documentation, so it will be necessary to have at least the Adobe Reader or comparable program to read PDF documents. Click on the red letters above to get this FREE program for your computer.

THE SIGHTINGS WILL FIRST BE LISTED IN CHRONOLOGICAL ORDER WITH THEIR SYNOPSISES AND THEN THE INFORMATION FOUND DURING INVESTIGATION WILL BE ADDED TO IT LATER.

This same witness reports seeing a similar object earlier on June 13th at about 3:10 or 3:20 am as he was driving east on Rt 22 in Circleville heading toward Rt 674. Looking in a NE direction the object appeared oval and white in color. With the windows down and the elevation at a bit higher than where the emergency helicopter flights fly, he heard no noise. As he watched the object, it made some turns and then appeared it might be landing near 674 as its movement was almost straight downward at that point. Approximate coordinates: 39.634450 / -82.837443 not far from A.W. Marion State Park and Hargus Lake.

November 07, 2018 - 1834 (6:34pm) - Duration: Approx 10 minutes
South Bloomfield, Ohio / Circleville, Ohio
“Jumping Lights” - Reported by two RUFOS members
Presently being investigated
Synopsis:
Witnesses reported to RUFOS that they saw anomalous looking and acting lights as they were driving south on US 23 from Columbus, Ohio and entering South Bloomfield, Ohio.  The lights had a jumping-like appearance as it moved east to west, eventually crossing US 23 in front of them and then heading farther west.  Investigation has led us so far to talk to other witnesses seeing similar lights.
This investigation has been completed and is considered to be an “Unknown” object - unidentified
as I know of no man-made object that behaves and appears as these lights did.  More info will follow.

*************************************************
January 17, 2018 - 1903 (7:03pm)
Amanda, Ohio – Route 188/Cedar Hill Rd South / Westfall Road
Round craft approximately 150 feet in diameter moving very slow and very low to the ground
Synopsis:
Witness reported first seeing an object with solid white lights on top and solid red lights on its bottom (non-blinking) off to the side of the road heading east toward him as he was driving west to Circleville from Lancaster along Rt. 188.  His estimation of the size of the object was comparable to that of a Boeing 767.  He noticed the low altitude and slow speed of the object which eventually stopped near Cedar Hill Road South about 200-300 feet above some houses and later headed toward Westfall Road.  As he had passed it, and he was turning around to see the object again, he noticed it was gone.  He didn’t see it go and that it was just gone.

All three of the witnesses were interviewed separately.

With the first set of witnesses, the main witness’s daughter helped verify his (their) event were very near Sisk Road and Rt.104 around 7:15pm and about 15 minutes later on US23 near Fletcher's Towing around 7:45pm

The second witness's sighting was about 1.6 miles away from the 1st witnesses.

The time-frames of both sightings are coinciding happening around sunset to 7:45 to 8pm.

Both witnesses described the object(s) similarly and their sketches show this.

Witness was hunting with his daughter and first noticed that the deer were blowing (behavior seen when something is disturbing them). He said he just happened to see something up in the sky. What he saw were 3 lights in a triangular formation with lights that he said he couldn't explain… “It’s on, but it’s not overbearing. It’s bright enough for you to see, but it’s not overbearing.” He said the color was dull white stating they weren't like the lights of a regular airplane or the type of headlights of an automobile. He didn't see a shape, just the lights configured in a triangular formation.

The duration of this sighting was approximately 6 or 7 seconds and didn't notice the manner in which it disappeared due to it disappearing as they were leaving their location. The second time he saw the lights was about 15 minutes later around the old Fletcher's Towing at 20615 US23. This time he saw them disappear "in configuration" meaning they went out consecutively within a couple of seconds in total. His daughter (witness #3) only caught a slight glimpse of the object.
Witness #1 computer drawing of hunting area with objects in the sky is below.
Witness #2

Witness was just stepping outside her house onto her front porch when she saw the lights across Sisk Road over the field on the other side. She described them very similarly to the first witness as being 3 lights in a triangular formation, but in her case, they were very bright and at arm's length were large as how she demonstrated with her hands even though from her description they might have been anywhere from 3/4 to a mile and a half away. She lost sight of them when she took her eyes off of them for just a second. She was estimating the time around 8:00pm stating that the sky was dark and she didn't see any clouds.

Something that helps corroborate the witnesses' sightings is the fact that the direction of view of Witness #1's first sighting was in the general direction of witness #2's location about 1.6 miles to the northwest.

It could not be determined for sure from the descriptions of the witnesses that this was one object or three objects together they saw, but it tends to appear it might have been three different objects that stayed in configuration while visible due to no shape (body outline) seen and the lights disappearing in consecutive order with the 2nd witness.

Witness 2 showing the size of the object(s)

February 14, 2017 - 19:22 (7:22pm)
Williamsport - Rt 207/Rt 22 area
Objects with 6-8 diagonal lights
Synopsis:
Strange amber-colored lights were seen in the Williamsport area - Rt207/Rt22 area. Sounds similar to our previous sighting back in November 2016. There are similar characteristics; lights are more numerous ranging between 6-8 lights. Other people have been seen on Facebook saying they’ve seen similar sightings in an area ranging from Hocking County, Lancaster along Rt. 188, Circleville, Laurelville, Frankfort, Chillicothe and many around the same time-frame of 7:30pm or so.
This time there appeared to be some animal involvement as the deer were acting strange.  This witness appeared to be somewhat cautious of reporting what was seen and contact with them ended.

November 01, 2016  - CIRCLEVILLE – WILLIAMSPORT - NEW HOLLAND - 20:15 (8:15pm)
Rt 207/Rt 22 - GPS Coordinates: 39.579035, -83.213819 (Google)
Three objects with three sets of lights all in a triangular formation.
Synopsis:
Traveling together with his friend after picking him up at his house, two witnesses were heading toward Circleville.  They were on Rt 207 heading toward Rt. 22 (south) when witness#1 saw the one perpendicular 3-light object straight ahead and up in the sky.  Not long after he saw that, he, together with witness #2, saw three horizontal sets of three lights together in triangular formation, one set on top and two sets on bottom (see sketch).  These were over a field to the west of them and appeared to be heading toward Williamsport area.

The witness then called 911
CLICK HERE TO SEE A VIDEO CREATED FOR THIS SIGHTING.

Synopsis:  Two witnesses driving home from Columbus, Ohio see and anomalous figure/entity sitting inside of a silver truck. It appeared very similar to the aliens in the 1985 movie Cocoon - White, slight body stature, almost glowing.  In a monthly meeting the two witnesses recall their experience and it is recorded and can be seen by following the link below.

MARCH 02 & 03, 2006
Ashville / South Bloomfield, Ohio
Slow moving / Hovering lights - Reported by Michael Moore (RUFOS member)
Synopsis:  Witness saw lights traveling low to the ground (approx 100-150 ft) as he was leaving to go to work in the morning.  The lights acted anonymously, moving slowly and hovering and possibly following the witness’s auto to South Bloomfield, Ohio and then hovering over a gas station before heading northeast.  The witness saw a portion of the bottom of the craft before it traveled to the northeast and out of sight.
CLICK TO READ ENTIRE STORY

MORE SIGHTINGS TO BE LISTED… 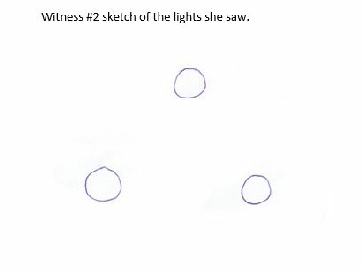 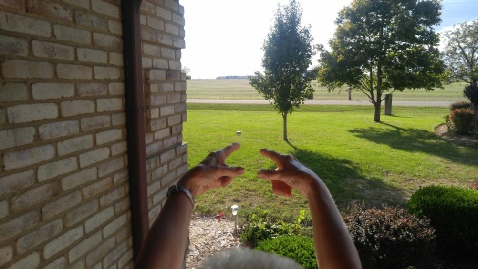